“CASA C.” residential project: an elegant house in the heart of Naples

“CASA C.” residential project: an elegant house in the heart of Naples

In the heart of one of the hilly districts of Naples, there is a building from the early 1900s that is representative of the Neapolitan Art Nouveau style: an interpretation of Art Nouveau that developed in the Vomero, Posillipo and Chiaia areas.

Like many buildings of this historical period, it represents trend of the eclectic and monumentalist architecture, while embracing more modern themes at the same time. It is precisely this combination that the interior design studio has decided to manifest inside the whole house.

The aim of 4RCH Group, which supervised the project, was to make the clients relive the suggestion of a bourgeois home through sensations, customs, textures and costumes from the early 1900s, taking up the theme of the Belle Epoque and reworking it with more contemporary forms, materials and technologies, so as not to fall into the trap of false history.

Given the limited square footage of the floor plan, the client asked the designers to make the most efficient use of every single space in the house. For this reason, the staircase leading to the loft at the entrance was designed to take advantage of the space under the stairs; however, since it is located opposite the entrance door, the goal was to "embellish" it so that it would not look more like a piece of storage furniture than a staircase.

The choice of wallpaper, which at this point became the dominant element of the "theatrical backdrop", brought with it the definition of the crystal balustrade (a material chosen in order not to conceal the background) and the handrail with integrated LED to enhance part of the texture as well as to illuminate the passage at night.

The chosen graphic design, "Hamsa", is a limited edition decoration taken from a painting by the artist Giovanni Bressana. The graphic design with a stuccoed ceiling effect and white, beige and brown colours give the room an elegant and refined touch, combining perfectly with the overall style chosen for the project.

In this way, a background is added to a passageway in the house that accompanies and welcomes the gaze of the guests and gives the impression of being in a modern home that is at the same time steeped in the history of its territory. 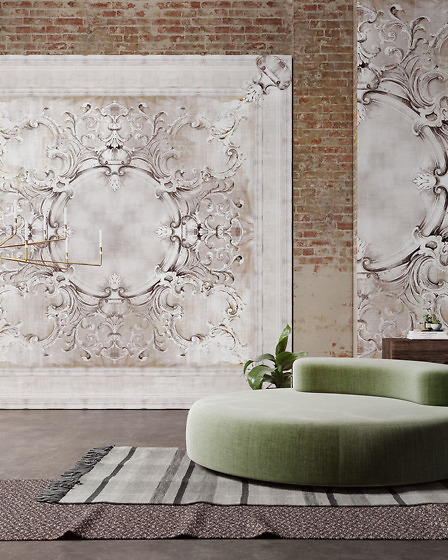